In Genuine interfaith dialogue, we respect the otherness of others and never claim our faith to be superior to the other, as that amounts to arrogance, and religion is about humility that builds bridges and communities and not arrogance which kills relationships and breeds conflicts.

All religions are about peace.

I am blessed to be open with all faith traditions, and I treat them as systems that are meant to help an individual achieve his or her own peace.

Again, I am blessed to have written up about every faith tradition, you can Google search the following:

You can also Google Search 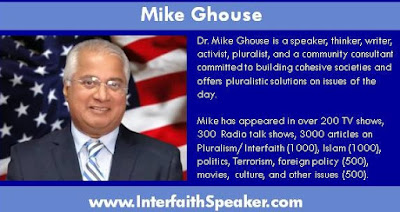 God has blessed me with the ability to stand up for every one, and I have to complete compiling the list, meawhile, you can check these out.
Dr. Mike Ghouse is a community consultant, social scientist, thinker, writer, news maker, and a speaker on Pluralism, Interfaith, Islam, politics, terrorism, human rights, India, Israel-Palestine and foreign policy. He is committed to building cohesive societies and offers pluralistic solutions on issues of the day. Visit him in 63 links at www.MikeGhouse.net for his writings at TheGhousediary.com and several blogs listed there in.
Share Now: